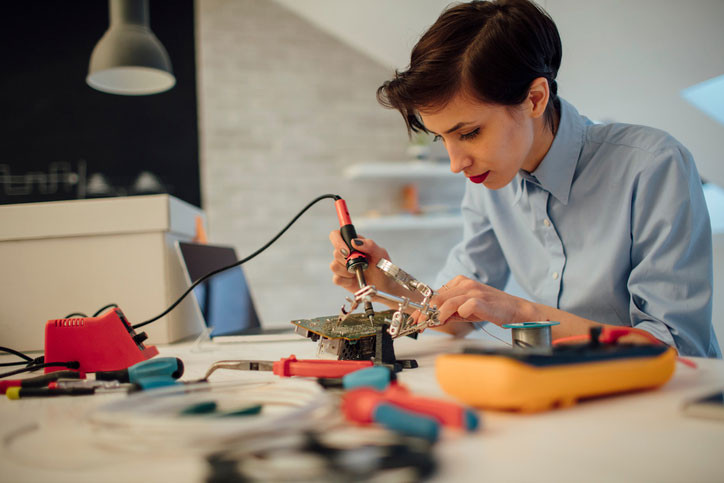 A 2017 study found that women in cyber security accounted for 14 percent of the sector’s workforce in North America, and 11 percent globally; and those numbers haven’t changed since 2013 (Global Information Security Workforce Study).

According to the US Department of Labor (2016) there are 20,000 women and 65,000 men working as information security analysts nationwide. According to the report, woman accounted for:

Not sure where we’re going with this yet? This ought to make it painfully clear: the average salary for information security analysts that happen to be women is $74,678… and for men it’s $95,060 (Data USA, 2015).

We’re not trying to make a case for the existence of systemic gender bias. To a large degree, that case has already been made and the data speaks for itself, even if the anecdotal evidence isn’t enough to sway someone privileged enough to be able to overlook it. What we’re more interested in is taking a look at the factors that lead to women being underrepresented in IT, and in STEM fields in general.

Is There Evidence for a Biological Basis for Career Preference?

If it’s simply that women voluntarily make different career choices than men then this could be one explanation, though it could hardly account for the pay disparity. Sure, woman are less likely to pursue jobs in the STEM fields, but there’s a lot more to it than preference, and nothing to suggest it could be attributed to biology.

In July 2017 a Google engineer famously made headlines with what has become known as the “Google Memo,” which pretty much amounted to a sexist rant in which he attributed the gender disparities found in tech to biological differences that cause women to make different career choices. He was ultimately fired from the search juggernaut for violating its code of conduct.

Was there any truth to what he was saying? The data and research he cited was subsequently both affirmed and criticized among those in the fields of gender studies and psychology.

It is well known that definite physical differences between the male and female brain do exist. Yet, researchers are nowhere near being able to determine how or even if these physical brain differences translate to different behaviors… and even further from being able to make conclusions about the kinds of jobs one brain might be better equipped for than another.

And though psychologists have established that, generally speaking, women tend to have stronger empathy than men, and men tend to be stronger systematizers than women, there is no biological basis for this assertion and these tendencies can easily be attributed to imposed gender roles and expectations placed on people – both boys and girls – at a very young age.

The Google engineer cited a dated 2003 study and hypothesis – the extreme male brain – which tried to make a link between a higher level of fetal testosterone exposure and autism… and then attempted to link autism to intelligence to make its case for the male brain being more adept at analytical skills. The fact that males are four times more prone to autism seemed to support this hypothesis at the time. Authors of the study asserted that people with autism are known for excelling in math and engineering, and often lack empathy. Researches attempted to use this to make a connection between higher in-utero levels of the male sex hormone testosterone and a general increase in potential aptitude for performance in fields like mathematics and engineering.

But as it turns out, there is little evidence to support the notion that people with autism are generally better at math or better equipped for work in the STEM fields than anybody else. This came to light just four years later in a 2007 meta-study which found that most research subjects with Asperger’s or high-functioning autism performed no better than average on math skills tests.

Ultimately, the entire notion that biology somehow factors in to why women are underrepresented in cyber security – and IT and tech fields in general – is baseless; relying on nothing more than some interesting corollaries without any actual causal connections.

Implicit and Confirmation Bias Are the More Likely Culprits

In the 2017 Global Information Security Workforce Study, 51 percent of women in the cyber security field reported that they experienced discrimination, compared with 15 percent of men.

Of those women who reported they were discriminated against:

The 87 percent figure for unconscious discrimination highlights the importance of addressing issues like cultural norms, values, and assumptions. While it’s the most common type of discrimination women in cyber security report, it’s also one of the most difficult to address because it pertains to ideas and assumptions that are ingrained in the minds of people, and subsequently in culture and society.

Born in 1943, British Nobel Prize laureate Tim Hunt brought to light an example of his implicit bias when he explained that women should work in separate labs because, “when you criticize them, they cry.”

If a Nobel Prize winner says something like this, you can bet plenty of others in his generation share similar sentiments. This is a real challenge women in the sciences face.

And bias doesn’t always rear its head to disadvantage women either. A study published by the Cornell Institute for Women and Science in 2015 found that women are favored two-to-one for tenure-track positions at university science departments.

It’s important to identify and be aware of biases where they exist, and correct for them with our rational minds rather than allowing unconscious bias to rule our behavior and decision making. This ensures we have the best minds working to solve the most pressing cyber security issues.

While it’s interesting to explore trends and statistics, it’s also important to emphasize that every individual – be they male or female – has their own unique skills set and aptitudes. Assumptions should never be made about individuals based on what statistical cohorts they may be part of.

As IT professor Kevin Hawkins puts it, “One of the best people I know as a security expert is a woman, and she is extremely good at what she does. I would only aspire to be as good as she is. Some people have it, some people don’t.”