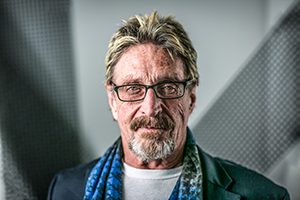 In an industry that sometimes seems to be filled with drab, mild-mannered, cookie-cutter crypto-geeks, a guy like John McAfee comes on like a Category 5 hurricane. Drugs, murder, prostitution, politics, and yoga swirl around the man who created the first commercial antivirus product and whose name still graces one of the largest cybersecurity companies in the world. He hates it.

McAfee has been a candidate for president of the United States and an expatriate living on a remote island in Belize. He’s faked heart attacks in jail to avoid extradition proceedings and been arrested for driving drunk with a loaded weapon. Johnny Depp is slated to play him in an upcoming movie.

An introverted programmer quietly hacking away in a dark basement, McAfee definitely is not. As godfather to the modern antivirus industry, though, John McAfee lives up to the hype.

A Buttoned-Down Beginning For A Cybersecurity Legend

He didn’t start out wild and crazy. Born in England to an American military father and a British mother, McAfee began his career at one of the most buttoned-down organizations in the world, during one of the most exciting technology ventures ever undertaken: his first job as a programmer was working for NASA in 1968, the year of the first moon landing.

A talented coder, McAfee set the archetype in those early years for today’s stereotypical job-hopping programmer. He quickly moved to Univac as a software designer, then later to Xerox as an operating system architect. Never settling anywhere for long, McAfee was always in search of new challenges and new positions, exploring the developing world of technology from inside the industry giants of the day.

The mid-1980s found him working at Lockheed. While there, someone passed him a copy of the Brain virus. Brain was the first computer virus for MS-DOS computers and McAfee was intrigued. As he studied the boot-sector virus, he realized that the best way to combat the spread of such programs was by creating other programs to detect and hunt them.

The antivirus program was born.

In 1987, McAfee founded his own company to create and distribute antivirus products, McAfee Associates. Initially, McAfee allowed individual users to simply download the product for free. Companies were charged a licensing fee. At the time, this new revenue model was seen as slightly insane, but it paid off. By 1989, it was doing so well that he left Lockheed to commit to antivirus work full-time.

McAfee was the first major antivirus product on the market, and the market was big. John McAfee was soon a wealthy man. He resigned from his own company in 1994.

Guys like John McAfee can’t sit still, so after he left his own company, he was soon back in the saddle. He co-founded Tribal Voice, an ahead-of-its-time venture that created one of the first instant messaging programs in 1994. In 2000, he joined the board of directors of Zone Labs, getting his fingers into the PC firewall trade just as it was cooking off.

In the mid-2000s, McAfee moved to Belize. He built a number of mansions and founded yet another company, this one exploring the natural phenomena of quorum sensing and the possibility of using naturally occurring rain forest compounds as antibiotics, attacking the global issue of antibiotic resistant bacterial strains from a new angle.

But Belize also brought trouble for McAfee. In 2012, a neighbor there, also an ex-pat, was found murdered in his own home. McAfee, previously a target of local police interest for possible illegal drug manufacturing and illegal weapons possession, was soon named a suspect.

Not believing he would get a fair hearing, McAfee evaded police and snuck across the border into Guatemala, where he went into hiding. He eventually emerged to request political asylum from the Guatemalan government. While in custody there, he faked heart problems to avoid being extradited back to Belize on murder charges while his lawyer worked on alternatives.

The alternative was deportation to the United States, where McAfee ended up again in late 2012. At a cafe in Miami Beach, feeling perhaps slightly pent up after months in a Guatemala prison and with a fat brick of $5 bills lent to him by “a friend,” McAfee propositioned a local prostitute. They hit it off and were married in 2013.

McAfee Continues To Look Ahead To New Threats

McAfee’s story isn’t just that of a has-been cybersecurity programmer corrupted by guns and money, however. He remains active in information security advocacy and in the cybersecurity industry. In 2013, he founded a network security company called Future Tense Central. He is the chief evangelist for security startup Everkey, and CEO of MGT Capital Investments, which he has pushed into cybersecurity investing and cybercurrencies.

He continues to present at hacker conferences such as Defcon and has persistently warned against the dangers of smartphone spyware.

In 2016, he ran for president as a candidate for the Libertarian party, on a platform including decriminalizing cannabis and moving to a non-interventionist foreign policy. Also, uniquely among candidates from all major parties, he strongly focused on the cyberwarfare threat and the need to prepare for it—a prescient position, considering the foreign interference in that year’s presidential election. He lost out during the primaries.

Today, he lives in the United States, protected by a bodyguard and usually heavily armed himself. He remains circumspect about his location, sometimes believed to be living in Portland, sometimes in Tennessee. His property in Belize has been seized and his home there burnt down under mysterious circumstances.

But despite the setbacks, McAfee looks more forward than back. He stated in 2012 that he couldn’t even stand McAfee antivirus software anymore, which he removed from his personal computers as being too annoying. Antivirus products in general no longer seem to be the answer to him; he continues to advocate for more active and effective defenses, and to leave his mark on the cybersecurity community.